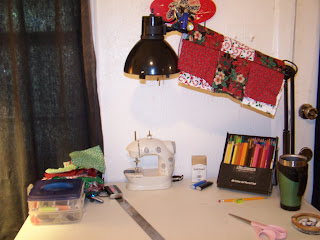 Well here it is my sewing center. I still have not gotten any of the things that I need for the dog blanket. I have 2 blocks out of 9 sewn together. Well my grandma is doing good after her heart stint. She finally called me to tell me that one of grandpa's sisters in West Virgina is not doing so good, and that she will be out of town for 2 weeks. I hope that everything turns out OK. It would be nice to see that side of the family again. The last time I was in Oklahoma was after tec school. right before I went to mind rot (Minot) North Dakota. Well me and the wife have exchanged gifts already. I am getting her a Nintendo DES. She gave me a wireless head set and camp ax with a good hunting knife, some knitting and crochet books, and a bunch of Disney shirts.


I have too figure out how the head set works. It is a FM scanning radio also. which drives me nuts do to the fact that it scans the FM if there is nothing going on on the device that is plugged into it. So it is driving me crazy, and I want to throw it against the wall. but it would not feel any pain so why bother. Now I want to throw the computer for not doing what I want.I am trying to add songs to it from my CD collocation and it does not want to do it. Well I am at the library and I am very bored. I need something to do and I have yet to figure out my stupid computer. I need a new bolt for one of the table legs for the dinning table. So I ran out to get it. The wife is shopping with Lourdes which gets her out of the house. So I ran to Lowe's and then to Joann then came here. I need to get more stuff for my sewing center. I asked about the little sewing machine that I have (style* elements) and they had no clue that there was such a thing. Today I asked if they carried some knitters graph paper, and the lady looked at me like I was crazy, like there is such a thing(i am sure she was thinking). It was the same lady that I had asked about my sewing machine a week ago. my wife says that the people that work at these places are stupid about the product and that I should not even bother them.

I really need that knitters graph paper I have this plan for dad's Christmas present for next year. The present will need to be drawn out before I try to make it. then It would be nice to have some 4:1 graph paper to do some quilting with but I decided not to even ask for it because the lady would not know what it was. 4 squares to the inch for those that was wondering. It is driving me crazy not having that which I need. I like to sew and knit and crochet. so you might be asking what is next on my agenda but I can not think of any thing else that might interest me. I want to go hunting.

The wife would cry and cry if I was to kill any thing. Its bad enough that I have to release the fish I catch. I also play magic the gathering on occasion. I still have to cut up my fire wood out in the yard, and get it put up to burn. Got home at the same time as the wife and we went out together to Michael's where I found some Glow-in-the-Dark white yarn. I am going to make a hat for myself out of it. This way It will never be lost anyone can find it. Well I figured out the stupid computer it just can not find some of my Cd's that I want to copy to it so I can put them on my MP3 player.
Posted by Ricky at 10:40 AM No comments: Links to this post