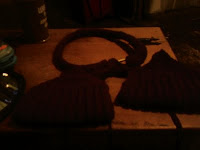 Well I finished that one project and started on another 3. finished 2 and now trying to do this one that I call a scarf hat. I decided to not make the scarf hat and make a cowl instead.That's what is on the circular needles. The two square looking things are booties that my mom likes. I have to sew them up then they are done. I have never made a cowl before, so it will be fun. Thursday will be my quit day for smoking. I will be getting some of that smokers gum and some patches. So this time I hope it will work. but the cowl is worked on circular needles in the round. Knit all the way for 30 inches. I found some more projects as I went looking for my dad's scarf. I am not very far along in it and need to get it done soon. 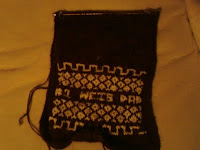 This is the beginning of my dad's scarf which says #1 Weis Dad. I spelled it like his last name and is pronounced like wise. I have no idea where my real father is and have no idea what he is up to since he has not written in a while I sure do hope that he is OK. His mom would love a afghan from me (which I might get the chance to work on after the holidays). I wonder if my dad would like an afghan. I found another afghan in my bins of yarn and decided to make that one for this friend that has a house that no one has seen yet. I wonder when he is going to host the next magic the gathering party. He says that the house is so small that the mice have a hard time turning around.

On this day of Veterans I would love to take the time to say that we are thankful for those that have gone before us and that those that have worked side by side with us and those that we will never get to meet. Thank God for our Armed Forces.