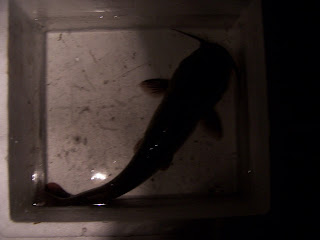 Went fishing this morning did not catch anything, although I did get a bite. So I went out again this afternoon and I got a bowfish, two small perch at the Withlacoochee river and these two spanish speaking fellows gave me some catfish. Then I went to work pond and tried it out at six and nothing started to bite until seven. and there I got two small perch and two catfish. I tried to fish the pond behind the library (which will be known as library pond), but the grass grows all over the shore. I am still feeling under the weather but at least I am not sneezing right now. The guys emailed and thought they had enough to draft tonight I really hate feeling sick. I have to mow the yard tomorrow so might not get to go fishing. Will see how it goes tomorrow. Would not mind trying them perch again, if there are small ones then there have to be bigger ones.
The river cats smelled awful bad so I threw them away, and the two pond ones got butchered real bad so looked up how to fillet a fish and found a good web sight, now I am trying to find one on how to fly fish. This is the biggist one I was able to get, maybe 2 pounds.
Posted by Ricky at 10:01 PM